School Board Supporter Calls Okaloosa Teachers “Cowards” for Speaking Up!!

April 5, 2022, YES For Okaloosa Schools posted two letters on Facebook from Okaloosa Teachers about problems in our School District. (https://truth4ok.com/anonletter/) One letter was mailed to us anonymously by a teacher who feared retaliation for speaking up. The other letter was published in the Northwest Florida Daily News in February. That author, Ann Kelley, identified herself as a retired teacher. Ms. Kelley related a story from a current teacher who spoke of problems with student violence against teachers that school administration ignores. The current teacher was not identified.

In response to these letters, a local politician and School Board Supporter, former Okaloosa County Commissioner Graham Fountain, repeatedly called the teachers “cowards” on Facebook for not identifying themselves.  He went on to say, “Put your name to your complaint or hush up.” This attack by an unabashed Supporter of our current School Board illustrates EXACTLY why it’s difficult, if not IMPOSSIBLE for local teachers and staff to point out problems, advocate for solutions and keep their jobs – A Clear Sign of Failed Oversight by Our School Board.

(The identities of the responders to Former Commissioner Fountain’s comments have been redacted to protect their privacy.  The exchange can be viewed at https://www.facebook.com/yesforokaloosaschools/posts/5657497824266067) 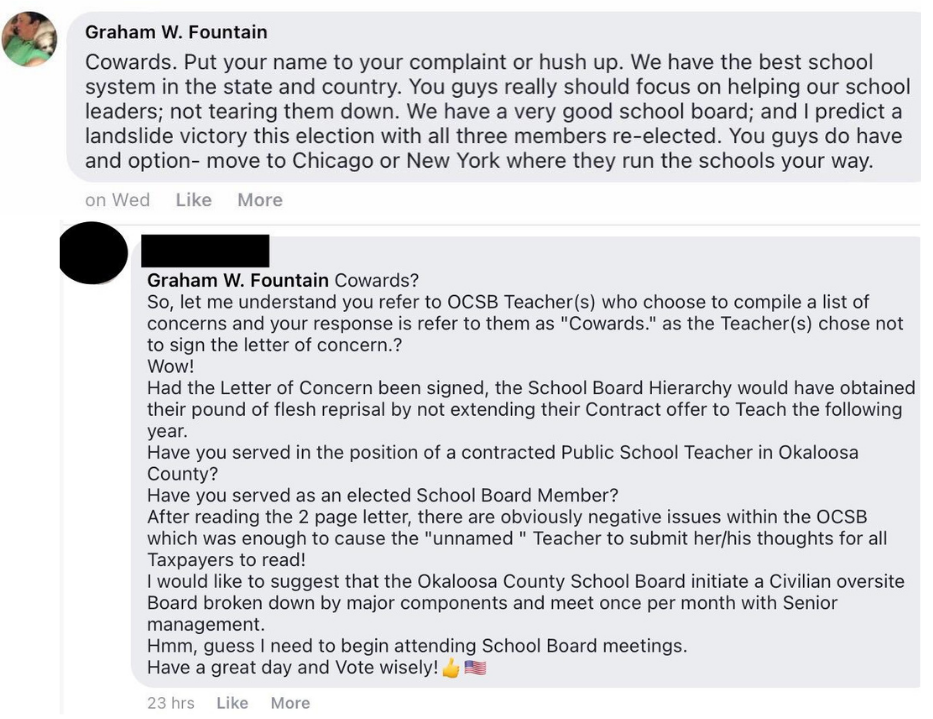 Then He DOUBLED DOWN!!!!

When admonished by a local teacher, former Commissioner Fountain doubled down, saying he didn’t need to justify anything to her and adding, “If you can’t take the heat….”

And he SUPPORTS School Board Incumbents!!!!