In 2020, the Okaloosa School District underwent a Performance Audit prior to a referendum on a ½-cent sales surtax for School Capital Spending.  The audit was conducted by McConnell & Jones of Houston, an independent Accounting firm selected by the Florida Legislature’s Office of Program Policy Analysis and Governmental Accountability (OPPAGA). McConnell & Jones had prior, recent experience conducting Performance Audits of Florida School Districts:  Hillsborough County and Duval County Public Schools.

IAW Florida Statute 212.055(11), the audit reviewed six overall “Task Areas,” each of which was divided into “Sub Tasks.” Across the six “Task Areas,” there were a total of 26 “Sub Tasks.” The auditor gave grades of “Met,” “Partially Met” or “Not Met” to each “Sub Task,” and based on those grades, each overall “Task Area” received a grade of “Met,” “Partially Met” or “Not Met.”

Here is a summary of the grades from all three audits: 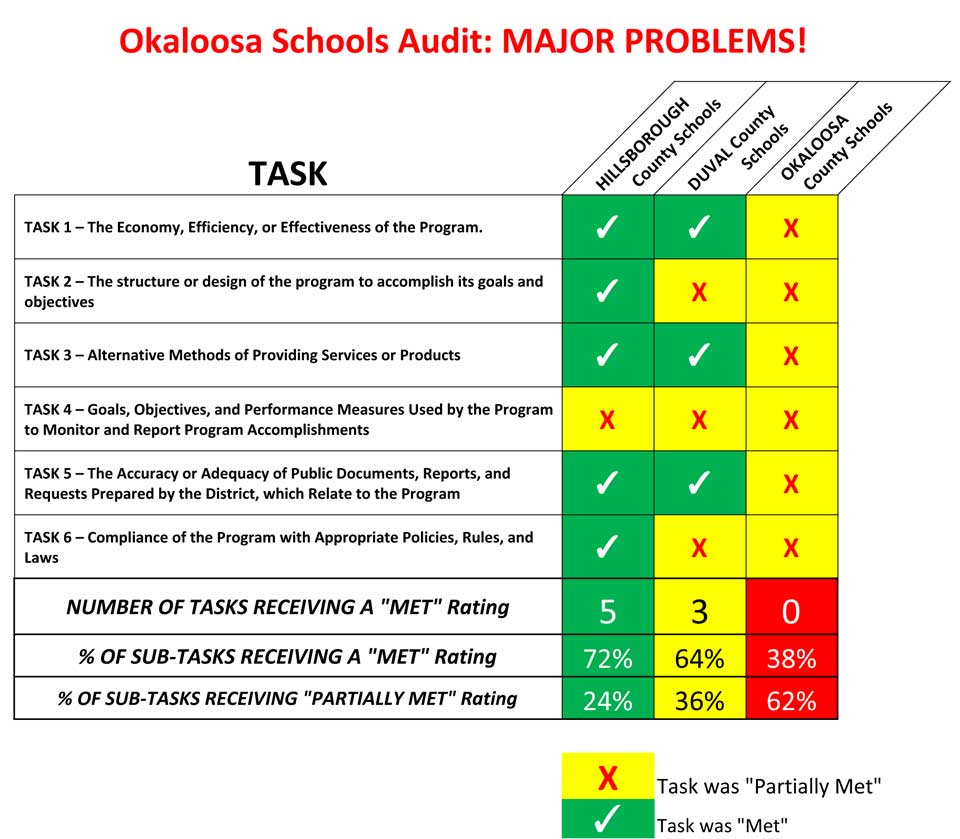 SCHOOL BOARD OVERSIGHT IS LACKING

Okaloosa’s audit report was dated August 28, 2020. At the September 10, 2020 School Board meeting, two School Board members tried to fool the public by saying everything “looks great” or calling the results “Excellent.”  (See at 44:04 and 46:09 at https://www.youtube.com/watch?v=mT2jqHoHQxI).  Nonetheless, the report contained detailed recommendations for how to FIX the numerous problems the audit uncovered.

Over the next seventeen months, the Okaloosa School Board neglected to follow up on the recommendations of the report.  They never asked for an update on how the fixes were progressing.

Finally, at a School Board meeting on January 20, 2022, after being criticized on Social Media over neglecting to follow up, a School Board member asked for a briefing on the fixes to the problems.

The first few minutes of the briefing was a discussion between the briefer and some board members on reasons they felt the audit had been a difficult one.  The School Board never challenged anything in the presentation. Worse yet, they actually participated in making excuses for the numerous deficiencies the audit uncovered.

The briefer, Assistant Superintendent Steve Horton, offered excuses for why Okaloosa performed so poorly in the audit.  At 5:00 in the video at https://www.youtube.com/watch?v=9QirCNgBRYg., he refers to the audit as “clumsy,” using the following excuses:

At 6:20, two School Board members chime in to make the following excuses:

Even more excuses followed at 9:55 in the video.  They include:

THE OVERVIEW DID NOT TALK ABOUT THE “BAD GRADES”

At 8:00, this slide was shown (Red highlighting circle added):

The bottom of the slide states that Okaloosa received no “Not Met” grades. However, the reality is that only one “Not Met” grade was given across the 78 “Sub Tasks” across audits of the Three counties (Hillsborough, Duval and Okaloosa). So, a “Not Met” grade in a subtask was an extremely rare event.

The facts that Okaloosa received a grade of “Met” in none of the overall Task Areas and only 38% of the “Sub Tasks” are left out.

The fact that Okaloosa was graded much worse than two other Florida counties is left out.

No School Board Member ever noted any of these facts.

When the briefer addressed the specific findings from the audit, every fix, whether it was completed or merely ongoing but not completed, was depicted in GREEN.   Doing this in a briefing makes the situation look better, but it doesn’t differentiate between what’s fixed and what’s not. (Organizations which are honest with themselves would depict incomplete actions in YELLOW or RED.)

A review of these slides shows that all fixes are depicted in GREEN – even if they have not been fixed yet. (Highlighting circles added): 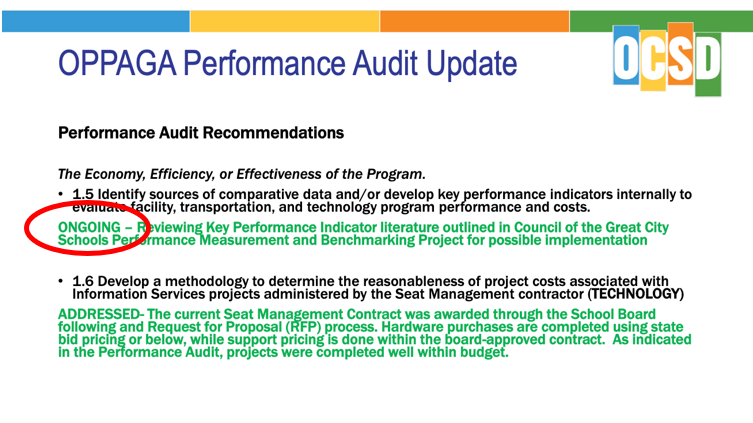 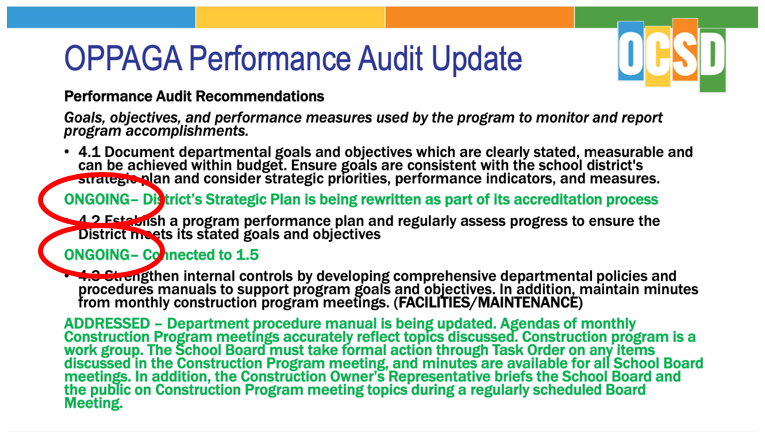 THE REVIEW DID NOT COVER ALL OF THE AUDIT DEFICIENCIES

Several of the audit findings addressed deficiencies in the transportation program.  (See all the deficiencies at https://truth4ok.com/audit/#audit.) Specifically, 2.2, 3.1, 3.2 and 3.4 addressed the transportation program.  But, since the audit, the district found out that “one other school district had [Florida Auditor General] audit findings…that indicated that sales surtax proceeds can not be used to purchase school buses.” So, the district “will still consider the recommendations made by OPPAGA in this area even though it is not within the scope of the half-cent sales surtax program.”  This is all covered on this slide…. 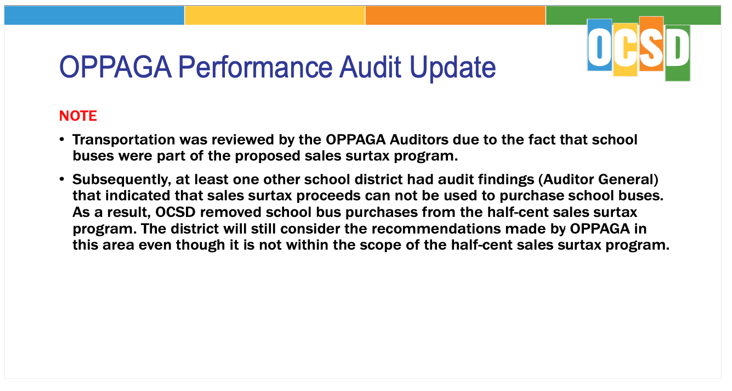 However, the School Board did not ask for an update on those specific findings (2.2, 3.1, 3.2 and 3.4), and no update was offered.  The only thing said was, essentially, we’ll consider the recommendations, but no School Board Member asked exactly what the recommendations were.  You can see this exchange at 30:09 at https://www.youtube.com/watch?v=9QirCNgBRYg.

The review came long after the board should have done their due diligence and properly represented Okaloosa County.  Because there’s an election in August, 2022, and at least one Board Member is already campaigning, there is pressure on the Board to show that they are paying attention.  The one Board Member who’s already campaigning for re-election posted the video of the briefing on a Facebook page shortly thereafter, saying, “The following school board video from 3/10/2022 gives a complete and accurate update regarding the OPPAGA report.”  This is simply not true:

Since March 10, 2022, there has been NO FURTHER DISCUSSION or update of the audit findings at any School Board Meeting.

THIS REVIEW APPEARS TO HAVE BEEN A POLITICAL SQUARE-FILLER EXERCISE.