WHEN FACED WITH A CHILD ABUSE SCANDAL, THE OKALOOSA SCHOOL BOARD REFUSED TO ACT…. 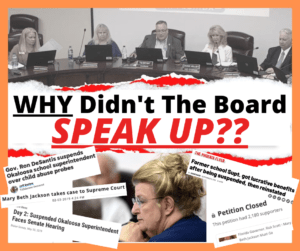 In 2016-2017, a horrific Child Abuse scandal rocked the Okaloosa School District. It was a scandal where no School Board Member ever took action to Enforce Accountability at the highest level in our school district.

In May, 2017, It became public knowledge that a four-year-old non-verbal autistic child was repeatedly abused by his teacher at Kenwood Elementary School in 2016.  The incident had been investigated in April, 2016 by the Okaloosa School District, and the investigator deemed the allegations substantiated. However, the teacher was quietly shuffled off to a different school, and the incident was not reported in accordance with Florida statutes to the Florida Department of Education.

In January, 2018, State Attorney Bill Eddins impaneled a Grand Jury to investigate the matter. The Grand Jury was highly critical of Superintendent Mary Beth Jackson, even though they declined to indict her.  Among their criticisms was that they “lacked confidence” in her ability to carry our her dutties as an elected official.

Here is a letter from the Commissioner of Education to the Governor which documents the Grand Jury’s findings: 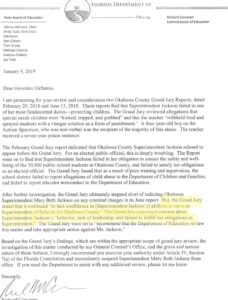 View this Letter by Clicking HERE

Despite this clear message from the Grand Jury, the Okaloosa School Board sat on their hands and never even made or passed their own motion of No Confidence. Another eleven months went by during which they never made a motion to ask Governor Rick Scott to suspend Jackson. As might be expected, Governor Scott did not suspend Jackson. He never received a request to do so from the Okaloosa School Board.

In January, 2019, new Governor Ron DeSantis finally stepped in, suspended Jackson, then later agreed to let her resign. He suspended Jackson despite NO request from the Okaloosa School Board.

Had it been left up to the Okaloosa School Board, disgraced Superintendent Mary Beth Jackson would have finished out her term in November, 2020.

That is Why We Must…