We Still Lack ACCOUNTABILITY in the Okaloosa School District

The Okaloosa County School District has displayed an appalling Lack of Accountability as evidenced by the multiple scandals which have occurred over the last 5 years.

Since 2017, scandals have become commonplace in Okaloosa schools – and our School Board has never acknowledged these scandals nor taken action to prevent them.

On March 22, 2021, a local mother appeared before the School Board pleading for their help.

Her daughter had been sexually harassed at school, her grades were plummeting, and no one was responding or helping the child or the parent.

The School Board members showed no sympathy, did not acknowledge her problem, and took no action.

Watch the reaction of the School Board in the video at left (or above).

Is this acceptable behavior from our School Board members?

The School District budget is bigger than every other county agency budget combined, BUT the School Board still voted to support a referendum raising your taxes for the second time in two years. They even took that vote in the middle of the coronavirus pandemic, with citizens having almost no chance to speak.

Just how much have they wasted? From 2014-2018, Okaloosa County Schools spent $7.2 Million more on overhead and bureaucracy (so-called “Administrative expenditures”) than similar-sized school districts that hire professional superintendents.

And even when the School Board has the chance to save taxpayer money, they don’t do it. In 2019, they even renewed a $6.5 million dollar computer services contract, refusing to negotiate or re-bid it to save money.

School board members opposed letting citizens decide on more accountability in our school system, but they were happy to support a tax increase on our community.

Even worse, some school board members thought it was more important for politicians to raise their special interest money and run their political campaigns than it was to let voters decide how the school district would be managed.

Other school board members said they didn’t want the extra responsibility of helping to make the school system more accountable!

To see the full clips of these school board members, click HERE.

Weak Leadership in Times of Crisis 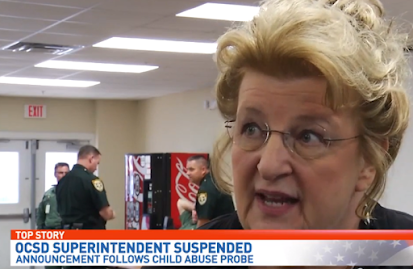 Most troubling of all, the Okaloosa County School Board did nothing to publicly criticize, censure, or reprimand former Superintendent Mary Beth Jackson, who was suspended by the Governor over covered up allegations of child abuse in the district.

In addition, when the School Board had the chance, they were silent as Jackson was reinstated by the Governor so she could resign and retain her salary and pension.

Now, because of their inaction, the School Board may eventually cost Okaloosa Taxpayers Half a Million dollars in legal fees, back pay, and other costs while Jackson sues the district – the citizens of Okaloosa county.